The Great Red Horse Robbery
by
Will Mayo 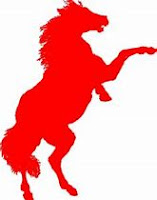 It was the summer of 1978 here in Frederick, Maryland and, boy, were we bored stiff. The whirlarama was dead to us as was the local putt-putt at the miniature golf course. And all manner of pinball wizards had come and gone and we'd seen it all. We sat there at Ray's, with Tony and Bobby and Bobby Sue and me in hand, trying to decide what to do with it all.
"There's the circus," I ventured.
"It's not worth it," Tony said. "They don't have any elephant." And it's true, no circus worth its name would go without one.
"There's the freak show," Bobby said.
"That's no good either," I said. "Once you've seen one dwarf pound a nail in his head, you've seen it all."
We turned all possibilities to and fro from the bellydancers down beyond the Valley to one last trip to Wolf Rock until at last Ray, our main man, spoke up with joint in hand.
"You know the Red Horse Steakhouse out on the Golden Mile?" he asked.
We all nodded. It was the premier restaurant in all of town.

"And you know that statue of the red horse that stands on the hotel beside it?" he asked.
"...Yes....Yes..." There were murmurs all around.
"I say we steal it," he said."
There were gasps and intakes of breaths all around but no one ever said no. So we all gathered together to steal that legendary horse and see our names set in gold. Tony grabbed his rope. Bobby gunned the motor of his pick up truck. Bobby Sue gathered some blankets to cover the evidence of our misdeeds along the way and I came along for the ride as Ray fired up another joint.

When we finally got there beneath the midnight moon down by where the shadow of the hotel and moon made its mark while cars went whizzing by, Ray gave his instructions.
"I'll climb the corner of the building and set the rope just so while Tony'l heave on the makeshift pulley and Bobby and Bobby Sue will start necking to distract the cops and you, Willie, get to being foolish now, will you?"
So Ray climbed the corner of the building, his feet on every crack with the joint clenched between his teeth, as Bobby and Bobby Sue got to making out as only they knew how to do while I got as foolish as I always could. Ray tied the knot around the red horse's belly and, darn, if. what with the other end of the rope wrapped around the fence around it acting as a poor man's pulley, didn't it just lift up in the air then and there and, with two strong men pulling, it came down to us all there in the parking lot. Ray and Tony came down from their derring-do and joined us and, what with a lot of lifting, we got it into our truck under a layer of blankets as we made out with it as the merry couple made out the best ways they knew how.
For the next six weeks that horse stayed hidden in Ray's shed as all manner of headlines blared from The Frederick News-Post and radio station Whacko. "Hotel Loses Its Horse." "What Will This Community Ever Do Without Its Horse?" "Curse Of The Horse." As always, the cops didn't have a clue. They'd been too busy watching Bobby and Bobby Sue make out.
Finally, it got to be the Fourth of July with fireworks exploding from the old gathering place on Seventh Street and with all the town distracted from our business the stoned man said quietly as the sparklers came on down, "Time to put it back."
So we repeated our business with the makeshift pulleys and Ray climbing that hotel with his obligatory joint and Bobby and Bobby Sue made out with one another and me acting awfully foolish as always and damn if we didn't all pull it off. Another moonlit night not a cop in sight. And Ray kept getting higher and higher and lost in thought.
"What now, Big Man?" we all asked him when the business passed.
"What now?" he said. "On with our lives , that's what's now."

And so the years passed and everybody got on with things. Ray joined the priesthood. Tony got to be big in the local Republican Party. Bobby and Bobby Sue got hitched and went into the restaurant business as did all their grandchildren (you should just see the pie ala mode their granddaughter makes. It's out of sight). And I got busy playing the town fool which is my own remarkable specialty. As for the restaurant and hotel, they've changed hands any number of times but that old statue of the red horse remains on top of it all still. Its feet bolted down in concrete, it watches over all.
Posted by Crystal L. Gauthier at 11:12 AM