In The Spotlight - S C Clarke

May I introduce you to Author S C Clarke.  Here is an author of epic genious! The Halcyon series books are sure to touch your, mind, body and soul. Fanstasy at its very best.
***** 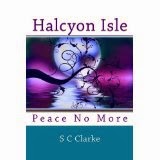 Peace No More
Mass chaos has broken out in the land of Aldenna, what started out as a simple war between good and evil, has turned into a battle of bloodshed. Neighbors who were once friends began to fight each other, this was not normal, there had to be an evil force that was making the people of Aldenna turn against one another. Those who were not affected by this rallied together, seeking out victory against this evil, which no one knows where it had come from.
Every year on the day the Halcyon was discovered, everyone in the land would gather around Lake Erewhon, this of course included the royal families as well, they all had a day of feasting and festivities to celebrate their ancestors that came from destruction and had the courage to venture to an unknown land, relinquish their magic and rebuilding everything.
All this now leads to where Halcyon is over one hundred years later. The now King of Indigo, Dominick Randolffe, great-grandson of Benjamin, and his wife Sarah, now ruled the land of Indigo on Halcyon Island. Halcyon is a beautiful and serene island, it is never too hot or too cold, and most days are a pleasant spring day with the occasion of rainfall. There was no fighting or war, they had no enemies, at least until now.
http://www.amazon.com/Halcyon-Isle-S-Clarke-ebook/dp/B00FROSKU6/ref=sr_1_2?ie=UTF8&qid=1422495186&sr=8-2&keywords=Halcyon+Isle

Review: Fascinating fantasy, reminds me of an alien race of Vikings the television show. I could not stop reading it, all through the night, I followed the happiness of the residents of Halcyon then shared in what was coming. So excited to read book # 2. 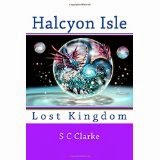 Lost Kingdom
Patrick and Rebecca Randolffe have met the fate of his father Dominick, Peter, Evan and William now have to find a way to complete the tasks which the four had started. Indigo is without a king or queen. There however seems to be peace once again amongst Halcyon, the remaining royal families are doing everything they can to to ensure the safety of the people of Indigo as well as Halcyon. Even though there is peace, there is still much going on. What has happened to Patrick and Rebecca? Was Dominick gone for good or will he once again return? William, Peter, and Evan all begin to become restless, none of them waking though, and as the storm continued they all began to have the same dream....They were all separately heading towards Indigo's castle just as they were suppose to in the morning. The storm had since let up during the night and the sun was beginning to rise higher into the sky and was almost directly over Lake Erewhon. There were a few wisps of clouds that would pass over in front of the sun, but not enough to block out its light or warmth. As they were approaching Indigo's castle they could see visions of Patrick and Rebecca, although they were not very clear. Then things started to become strange, for some reason when they met, rather than going into Indigo's castle they decided to go to Woodstream and to see Roter. So off the three went and when they finally arrived at the great redwood, Peter saying the words, the door opening and the three of them entered and climbed down the spiral staircase. Neither one of them could see anything all to clearly now, it was like things were popping in and out, and not staying long enough to make a clear impression. There was the table in the room under the redwood, there was something on the table that was not there before, and how could there be, only the four of them knew how to enter and one of them was missing or even gone. Then the room started to spin slowly as images were still blinking in and out. There stood one man, then another, then another, and another, four all together, although they could not clearly see who they were for their faces were a blur. Everything else started to get hazy all around them, then in a blink they were at Lake Erewhon, the haze around them lifted and they could now clearly see the four men who were in the redwood with them more clearly, although they still did not know who they were. William, Peter, and Evan all tried to speak at once, however their mouths opening but no sound coming out. Not sure what was going on and as they looked around Halcyon did not appear to look as it does today. Confused the three kings did not know what to think, there was an almost eerily frightening feeling with also calmness, something told them that all will be alright. One by one the four strange men began to approach them, the last one more slowly than the others. The first man speaks to them, “Do you know why you are here?” Peter tried to speak but still could not, and shook his head to say no. William then looked at the four men and with his head movement and gestures was trying to ask then who are you? The fourth man goes closer to them, “Do you not know who we are? Do you not recognize us?” he asks them, they all shake their heads no, although they should have clearly known who these four men were. “I am Benjamin Randolffe, the others are Charles Sterling, Thomas Lyman, and Jacob Konzak.” said Benjamin as he pointed to the other three men. Peter, Evan, and William stood there motionless, Evan tried to speak, why couldn't they speak, there were many questions going on through their heads. Thomas then speaks, “We have much to tell you, but not right now, you will see us again.” And with that William, Peter, and Evan were back in their castles sleeping.
http://www.amazon.com/Halcyon-Isle-Lost-Kingdom-2/dp/1499195591/ref=sr_1_1?ie=UTF8&qid=1422495186&sr=8-1&keywords=Halcyon+Isle

Review:
What a fantabulous, majestic read, these books are keepers. They keep you riveted to the page for the who length of the book. You fall in love with the characters and root for their survival. Love it when they find one another again.

Return From Kiadoz
What felt like only three long months since Peter and the other kings of Halcyon were trapped in Kiadoz after Dominick had cast a spell as he was being banished by the Kiadonians, in reality was over three years. No one there had realized how much time had actually passed and that time was almost at a stand still. Their wives and the people in Halcyon could not get to their kings and even though they presumed the worst everyday they continued to search for them. In the hopes that one day they would once again return back home. For the past three years, Helena, Rachel, and Marie led their countries, all of the countries had a ruler except Indigo, Jayson took over the duties as king, with Ava assisting him. Jayson never actually took the throne, he refused no matter how many times he was asked. Jayson would not unless he knew his son Jasper to be gone to him and he had the body to prove so. During these three years Ava and her brother Seth came to live in Indigo's castle after their father passed away. Almost seven months after Jasper and the other kings disappeared Ava gave birth to a beautiful baby girl she named Viviana Elizabeth, Viviana to define life and that although all seemed hopeless and bleak, life still went on. Elizabeth after her mother who passed away from complications after Ava's brother was born. Ava was almost five at this time, she still remembers her mother clearly to this day. Viviana was almost three years old now, her birthday only a little over a month away. Jayson and the house maids did everything to make Ava feel welcome them there in Indigo's castle, her brother Seth was being trained to be a knight by Jayson himself. Halcyon became peaceful and quiet again, the kingdoms and the people went on with their lives. Daniel and Mitchell were now in their teen years, Maxwell and Daisy had just turned ten and little Johnathan was almost five now. Despite not having their fathers there, their mothers did everything to assure them that all would be alright.
http://www.amazon.com/Halcyon-Isle-Return-Kiadoz-3/dp/1502545543/ref=sr_1_4?s=books&ie=UTF8&qid=1445189943&sr=1-4&keywords=Halcyon+Isle

Another wonderful fantasy, sci-fi. The author took me into the newly quiet world of Halcyon.

I hope you all will take a look at these books. A very different kind of read but well worth it.
Posted by Crystal L. Gauthier at 1:50 PM