Juliette Douglas is in the Spotlight 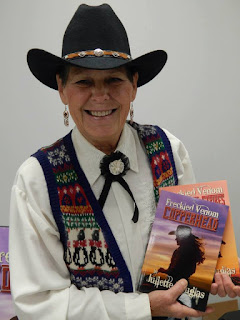 About Juliette Douglas Juliette Douglas is Kentucky's Wild West Tale-Spinner, penning novels with spirit, suspense, heart and romance. Her fast-paced hard-hitting stories about strong, bold and brassy women in the old west are a winning combination for her readers. Men, women and teens alike enjoy traveling back in time eating dust, shivering in the cold, sitting around a campfire sipping coffee telling tales or riding the trail with her characters. She paints a vivid palette of landscape, hard times, true friends, quirky characters and happy endings. A Laramie Award winning author, Juliette lives on an old farm she has named Froggy Flats Farm...cause it's flatter than a pancake and has tons of frogs in the pond! She's a rescue Mom with 2 dogs, 2 cats and 2 possums, who were featured in her first children's book 'We Are Awesome Possums'. More Awesome Critters Series of children's books will follow. Take time to visit, www.facebook.com/author.juliette.douglas or my website: http://juliettedouglas2016.wix.com/mysite for updates and events. See you on the trail!!

Freckled Venom: Bounty hunter Lacy Watson must endure Marshal Rawley Lovett's infuriating presence in order to capture the scum who killed a little boy's family. Both are bent on justice, one by law, the other, out of vengeance! Copperhead Strikes: A vicious outlaw seeks revenge against Lacy by pillaging her hometown of White River. The young spitfire won't let others suffer for her acts. Before more people die and the whole town is burned to the ground, she must stop the carnage. Skeletons: Will a determined bunch of kids become more trouble than a pound of pennies for their kidnappers? Lacy is out for blood, Rawley wants to think things through, but will they find the kids in time? Or will they be lost forever? Receiving high acclaim for her western novels, author Juliette Douglas invites you to pick up this book and enjoy some great Western adventures! Saddle Up... Let's Ride!

SHE’S BACK!
There is nothing ladylike about Lacy Watson, bounty hunter. She’s tougher than a hungry wildcat and as ruthless as the fugitives she chases down. She likes to do things her own way, and she doesn’t care who likes or disapproves. When she teams up with Tate Morgan to bring in the elusive Pocatello Kid, she has to rely on her own cunning and determination to outfox the outlaw and her partner to claim half of a $5,000 bounty for herself. Can she backtrack, backtalk, out scheme and outmaneuver Tate and The Kid? Only the flame-haired, freckle-faced vixen and her beloved horse, Fancy, know for sure.

🌠Pocketful of Stars🌠 by Juliette Douglas (Author) When Colt Rawlins answers his old friends call for help, the last thing he expects to find is the little girl he grew up with, but she doesn't recognize him. Carlie Anne is a woman now and wants no help from the saddle bum who rode into her camp. Tom Riley's greed makes him want her land like gold fever has struck and he will do anything to get it. Even kill her, if he has to.  LINK: https://amzn.to/2IClFNC --
🌠Praise for Juliette Douglas' Novels🌠 "Douglas brings a warmth to western writing that is uncommon. Too often, male characters dominate tales of the Wild West. I'm glad Douglas has chosen to bring strong female characters to the forefront." "This author is one I will be reading again, great job Ms. Douglas." "One of the best writers out there!" #Western, #Romance, #Historical, #Funny, #Loving, #CattleRanch, #Women, #BookBoost, #Bookstagram, #Bookshelf

AWESOME POSSUMS "We are AWESOME POSSUMS" https://amzn.to/2IBqOoX
Children’s Books, Parents read to you kids. Author Juliette Douglas and illustrator Steven Barton have joined talents with this new children's book *Awesome Possums*. Bright, colorful illustrations combined with unique storytelling make this a tremendous book for the beginner reader. Adults will enjoy it, too. Perfect for any grandparent to have on their bookshelves. This book is written for naturalists, teachers, parents, grandparents and children in hopes of teaching and learning fun facts about North America's only marsupial! This is Jake and Jasper's story. ----- Award-winning western author Juliette Douglas has penned her first children's story as told by the two possums she raised. She hopes everyone will enjoy this whimsical tale that is an informative and fun read learning more about our Awesome Possums! ----- Steven Barton, also known as CrescentDebris, is a talented artist of many styles across various media. He adds one more to his resume with these adorable little creatures, marking his first time working on a children's book! You may further check out Steven's work here: crescentdebris.com #Children, #Learning, #Wildlife, #Opossums, #Ticks, #Reading, #Fun, #bookshelf, #authorlife, #bookstagram 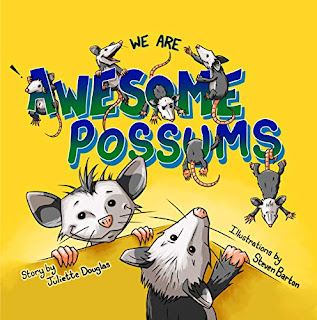 Bed of Conspiracy by Juliette Douglas https://amzn.to/2GHRpyN Bed of Conspiracy Espionage in 1876 Colonel Tom Brady was in charge of protecting President Grant and sniffing out any terroristic threats to the President or the country. And right now, he needed an informant...a female informant, to invade the southern sympathizers connected with the Knights of the Golden Circle, who were slowly converging on Washington, DC, set to overthrow the government and assassinate President Grant. Samantha Davis saved Colonel Brady's hide by stopping some thugs from beating him to a pulp in Saint Louis, and it was going to take some doing to transform this brash, uncouth street waif into a southern belle for his purpose. Trailing a herd to Abilene, Kansas, Ross Cooper had no idea what lay in store for him with Colonel Brady's next assignment. Will Ross Cooper and Sam Davis make the perfect undercover couple for this undertaking? Or will they constantly lock horns blowing their cover jeopardizing the mission? Will they be able to keep President Grant safe? An era of time not often explored, comes to life in this new novel by Juliette Douglas. Fiction based upon fact. *** Juliette Douglas has strayed off the trail and out of her comfort zone penning western novels to bring you Bed of Conspiracy, a tale of espionage in 1876. As her editor I have watched her grow into an excellent storyteller with exciting tales of yesteryear and never a dull moment action. I thoroughly enjoyed reading and editing this new novel by her, and I'm sure you will, too! Debra Wagner, Editor #Romance, #Historical, #Women, # espionage, #conspiracy, #BookBoost, #Bookstagram, #Bookshelf 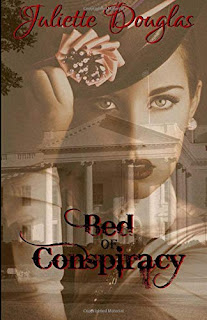 Perfume Powder & Lead: Holy Sisters by Juliette Douglas (Author) https://amzn.to/2VfmHWx
Laramie Award Finalist: Adventure/Caper 2016 Cons, flim-flam artists, and thieves...the western frontier boasted many colorful characters. Among those were bold, brassy, and strong women of the 1880's... Kip, Mitch, and Daisy are up to their old 'tricks'... Bank President Horace Dahlrumple would swear on a stack of Bibles... 'It wuz them Sisters who stole the money from my bank'... Ex-priest turned bounty hunter, Tate Morgan, ain't too sure...hmm..... Things are heating up on the trail... Oh...Lordy...the old west ain't dead, yet! Written in the tradition of The Freckled Venom Series by award-winning author Juliette Douglas. 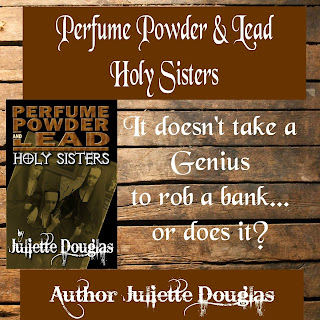 WHAT READERS SAY ABOUT JULIETTE DOUGLAS' WESTERN NOVELS "I find Juliette Douglas' approach to be formulaic, as in the formula that works. Simple effective, fun and engrossing" Michael "It was worth every minute of reading through the night; it's just that good!" Stephen "I'll read anything she chooses to write. Keep 'em comin'!" (Liz). #Western, #soileddoves, #hilarious, #adventure, #action, #bankrobbery, #thieves, #Bibles, #Nuns, #Bookreviews, #Bookstagram, #authoflife, #RT Miss Birgit's Dilemma: Mail Order Bride by Juliette Douglas SWEET Historical Romance Kindle Short Reads Traveling to the heart of the majestic Rocky Mountains, mail order bride Birgit Andersson didn’t know what to expect when she arrives in Sinking Springs to meet her prospective groom, Johan Svensson. All she knew was her insides were twisted with anxiety and excitement at the same time. But surprises awaited Birgit in the small town. Will God step in…revealing a plan within this vast wilderness, home to a few brave men and even fewer courageous women?

Find all of Juliette Douglas's Books on her Amazon Author Page: https://www.amazon.com/gp/product/B06XDHL7PB/ref=dbs_a_def_rwt_bibl_vppi_i7
Posted by Crystal L. Gauthier at 7:22 PM