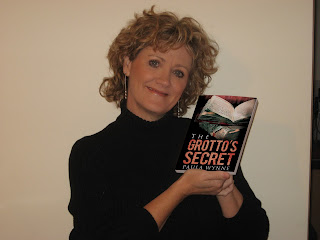 I has been my life-long dream to be a novelist and the dream has come true thirty-five years after I first decided I would be a novelist. Harbouring a near-obsessive love of learning the craft of writing, I have been scribbling down the stories in my head ever since I can remember. At the age of eighteen I used my first pay-check to buy a long distance writing course. Many years later I received an ‘Honourable Mention’ in the 75th Annual Writers Digest Writing Competition for two novels (written and not yet published), which inspired me to continue writing.

The Grotto’s Secret took me a year in total. The first draft took me five months. I then sent it off to beta readers who read it and gave me their feedback (both good and bad). Using their comments, I did another rewrite before it was ready for a rigorous editing process with three editing passes!

What is your work schedule like when you're writing?
I have a constant juggle at the moment. I am promoting The Grotto’s Secret and writing two other thrillers amidst all the usual family and pets requirements. Added to that I have been developing my Spanish garden and now racing against time to get seedlings into the ground before summer fires up. I still have to go and visit a few setting locations before those books are finished so I have to fit that in. So things are pretty hectic to say the least.

How do your books get published?
I published The Grotto’s Secret and three other writing resource guides through Prado Press.

Where do you get your information or ideas for your books?
I have a pretty wild imagination and have loads of things bubbling in my head for future books. When interesting or weird things happen around me I take a note of them and keep them as ‘juice’ for future stories. Apart from that I have characters jumping into my head at any given moment in time.

During the hunt for our new home in rural Andalusia, my husband and I found a tranquil home with stunning views down the Valle del Guadalhorce towards Malaga and Marbella.

Apart from a white-washed village in the far distance, the valley is lush with green wheat fields and rolling hills, shadowed by layer upon layer of distant mountains. My first sight of the Guadalhorce Valley gave birth to the fictional location of The Grotto's Secret. As I gazed at the stunning view, a medieval character just popped into my head and I could see her in that landscape. She was so real and had a story to tell.

The other night another character popped into my head and he is giving me a story to be linked to the Torcal series, where The Grotto’s Secret is the first book.

When did you write your first book and how old were you?
I wrote my first story before ten but it may have been unreadable at that stage of my growth and learning!

What do you like to do when you're not writing?
When I’m not writing, I am pottering in my garden, walking my Springer Spaniel along the country tracks around my home or exploring caves and ruins in Andalusia.

What does your family think of your writing?
My family have always been very supportive. My husband reads my work and gives me good critiques as does my mother. My son helps me in so many other ways too and my extended family are always encouraging me to carry on writing.

How many books have you written? Which is your favorite?
I have written 5 non-fiction books and 1 novel and by far the novel The Grotto’s Secret is my favourite.

Do you have any suggestions to help me become a better writer? If so, what are they? Read and learn! For many years I have obsessed with learning everything to improve my writing. I have acquired a bookshelf of excellent reference books by highly acclaimed authors, so I wrote Pimp My Fiction: Secrets of How to Write a Novel. This inspired a Writers’ Resource Series with 101 Writers’ Scene Settings and A~Z Writers’ Character Quirks.

Do you hear from your readers much? What kinds of things do they say?
Now as The Grotto's Secret gains new readers who love conspiracy thrillers with a historical mystery twist, I am ‘thrilled’ to hear that my eaders describe the book as a ‘must’ for fans of Glenn Cooper, Kate Mosse and James Rollins! 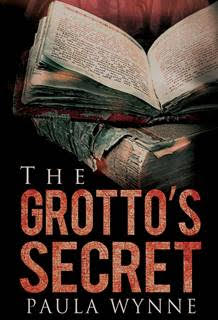 TV show host Kelby Wade is forced into the search when her niece is targeted by the relentless assassin who killed her brother. She is pursued on a perilous quest, from a grotto in rural Andalusia to a bizarre hospital in Surrey, to uncover the mystery found between crumbling sheets of parchment in the ruins of a rural Spanish farm.

In a race against a conspiracy who want the herb’s power, she struggles to piece together the puzzle and follow the trail her brother left to trace the mysterious plant before the deadly conspirators locate it.


It’s only a matter of time before the ancient secret gets exposed ... 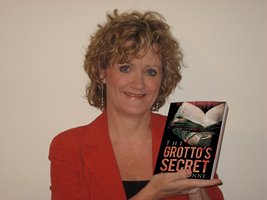 Bestselling author of Create A Successful Website, Pimp My Site and Pimp My Fiction, Paula Wynne, has appeared on TV several times, including breakfast shows and news programs.
As an award-winning entrepreneur and editor of iHubbub's home business magazine, Paula has also been featured in various magazines and interviewed in national newspapers. Paula and her husband Ken starred in the BBC Show, Escape to the Continent, which showed their quest to live in Spain.
For a long time Paula has been obsessed with learning everything to improve her writing. She has acquired a bookshelf of excellent reference books by highly acclaimed authors so she wrote Pimp My Fiction: Secrets of writing a successful novel using techniques from the best reference guides on creative writing.

Find out more about The Grotto’s Secret
http://paulawynne.com/the-grottos-secret